It’s the Easter holidays here, with an extra bank holiday thrown into the works for the Queen’s Birthday (interesting to note that it is celebrated here with a bank holiday, a parade, a 21 gun salute, an RAF fly-past and the Governor receiving the Royal salute whereas I recall no town near me in the UK adopting such formalities; a taste of how British the inhabitants of the Islands feel). With that in mind, we decided to get out to Camp for the weekend with a trip to the settlement of San Carlos to stay in some self-catering at Kinsford Valley Farm.

The old house – sadly no longer in use

San Carlos from across the water

Of course, San Carlos is best known for the site of the British landing during the conflict of 1982. It’s astonishing to visit the small museum cabin there, see leftover paraphernalia from the conflict and to imagine just how different the scene in front of us would have been just 35 years ago. The site was chosen for the strategic and geographic advantages it gave the task force; the surrounding hills prevented Argentine aircraft from gaining targets until the last minute but also blocked the British long-range radar, leading the low-flying Argentine jets to zip in over the hills and make multiple bombing runs at the British armada stationed there. This gave the area the nickname ‘bomb alley’, though it’s hard to imagine that from the serenity of the area on our last day there:

The jetty, formerly used for wool and resupply, then for landing troops, now used for nesting

A night heron stalks in the calm

Southern giant petrels glide across the surface of the water

Rock shags/cormorants use the jetty now

The scene is hard to contrast with other images I’m familiar with from the same area: 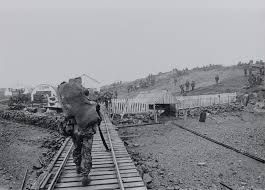 While we were up that end of the East Island (see the Falklands map on the link at the top) we took the opportunity to visit one other place I’d been wanting to visit since we arrived here. In 1950, for reasons that we struggled to fathom, it was decided that a mutton processing and meat tinning factory should be established on the far side of San Carlos water. Of all of the places in the World that I would choose to establish a business like this, I can’t say I’d have chosen this particular spot given its lack of access, labour market, communication and, well, anything.

The site of this particular business enterprise

Some of the plant itself

Unbelievably, the factory didn’t succeed in its commercial hopes and shut shortly after. Although these buildings could never have predicted it, this wasn’t to be the end of their working life. Ajax Bay provided the British forces landing in 1982 with a useful site for a field hospital. True to military form, it was soon given a name-change and became known to most as ‘the Red and Green Life Machine‘ (in reference to its impressive record: all those who entered alive, left alive).

The old foundations of a temporary platform, perhaps?

As well as the obvious signs of its military past, the buildings still hold some spooky reminders of the more human side of its former life; the remnants of the people stationed there:

The Uganda was the hospital ship – obviously someone’s home

Given my background in the Falklands conflict and the fact we now live here, I’m not sure I will ever find it anything but humbling and deeply fascinating to see the remnants of the 74 days of land, sea and air battles that litter these islands.