My friends have often joked about my lack of ‘stuff’. It’s fair; I’m not prone to hoarding possessions with much emotional consideration to their provenance. Thus, when it came to leaving the islands with no onward destination, I wasn’t keen to keep too much of what we had acquired over the past five years. Thankfully, remote islands have historically been difficult places to obtain the things that you need and, while much has improved with modern transport links, there is still a very healthy culture of buying, scrounging or rescuing second-hand goods on the islands. ‘Tip-diving’ has long been a perfectly acceptable part of Falklands procurement practise. I found this reassuring in an area where there are very limited options for disposal of goods and we were quickly able to sell-off or give away a surprising amount of our stuff, wasting very little in the process.

I didn’t get particularly down about seeing the various elements of our life be carried away piece by piece. If anything, I was happy to see it all go. There were, however, a few exceptions. One of which, I confess, took me a little by surprise.

To my shame, when I first arrived on the islands in the Winter of 2015, I found it quite amusing to see such a large percentage of the population wandering down the roads clad in what looked to be outdoor technical onesies adorned with high-vis stripes. It didn’t take long to realise that the ‘boiler suit’ was the unofficial national dress of the Falkland Islands. One of my fond memories from my time in the school is of losing many minutes of one lesson laughing along with my students as they expressed genuine disbelief that I didn’t own one of these boiler suits, followed by a long discussion about their merits and the different styles/colours they each possessed.

Unbeknownst to each other, that first Falklands Christmas of ours, my wife and I both bought each other boiler suits and were immediate and unashamed converts! I think we first saw it as a bit of a laugh, while also being something quite useful. In another way, I think, it was partly about joining in the culture of the islands too. So many aspects of the islands are defined by the unusual climate and the apparel is clearly one. The ubiquitous wind brings a chill that constantly gets in among layers, but the padded, waterproof and well-sealed boiler suit repels it all! It allows you to not think twice about the weather, layering up underneath and heading out in the fiercest of wind and rain determined not to allow the elements to ruin your experience. It’s strange, for me, to see an item of clothing improve your outgoing mindset like that. As I’m sure my friends will readily attest, I’ve never paid much attention to my clothing.

The logical part of me figured that, heading back into Summer and on to an unknown destination, it made no sense to try to pack a giant boiler suit into a box or suitcase only for it to sit idle halfway across the world. Still, when it came to selling it off, I found myself being oddly sentimental about my boiler suit! Perhaps there was a realisation that I wouldn’t be likely to buy another one elsewhere and so it came to define us drawing a line underneath our Falklands adventure. Perhaps it was because I was saying goodbye to a community that it drew me into (even attending events where, no word of a lie, those not in boiler suits were a stark minority). Perhaps it was because I looked back at all of the adventures and weekends away that we had been on for nearly five years and realised that, through it all, this trusty friend had been there with me, keeping me warm, dry and free of penguin poo: 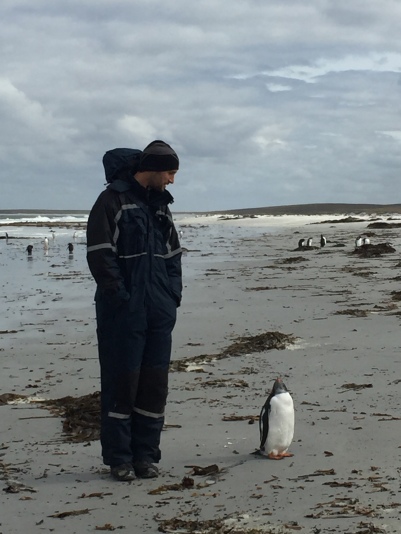 Had to be done… 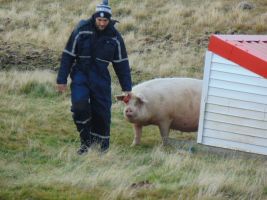 Two albatri landed next to me. Unforgettable

I loved this place 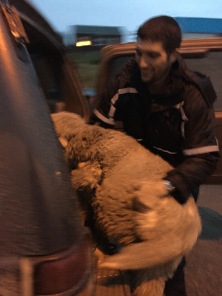 Taking Milo to his next garden

Pausing for a break 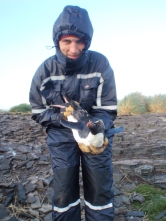 What else would be suitable for helping with conservation projects?

Keeping the wind and rain off on Bleaker

Whatever the reason, I guess it has gone full circle: my boiler suit, so much a part of Falklands culture, has been sold on to another resident in that practical island tradition.

The only other similar struggles we had were with our aforementioned cars and, for me, when it came to my camping gear. My tents, sleeping bags, mats, stove, pans etc all much loved and shipped down with us; the accompaniment to so many treasured memories, yet logic dictated that there was little worth in shipping them back to sit unused for so long while our future remains uncertain. A theme emerges. Our attachment to these things derives from the experiences they accompanied, yet we can’t hold on to them forever. Not like the memories.

It could be that there’s a lesson here. We have to remind ourselves that it’s good to see things (however valuable they might be in sentiment) go to a good home to be part of other people’s lives, while we can hold on to the experiences instead. In short, as my friend Zoran is prone to saying: collect memories, not things.

And yes, the long-promised concluding blog post is still imminent.