Thirty eight years ago today, in the early hours of the morning, the first assault wave of the Argentine invasion force landed on the shores surrounding Stanley. Thus began 74 days of bloody conflict that would alter these islands forever. 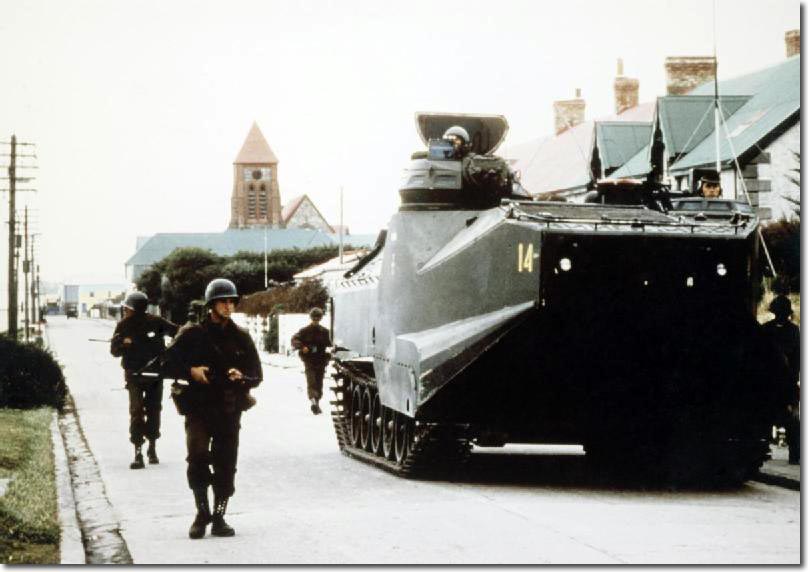 Argentine forces occupy the once peaceful seafront of Stanley

Contrary to what is often reported, the few dozen Royal Marines stationed in Stanley at the time put up an impressive fight against vastly overwhelming odds (trust the Royal Marines to see 36:5000+ as a ratio worth fighting on) before they were ordered to surrender by the Governor to save further casualties. Up to that point only Argentine soldiers had been killed, though that wasn’t for lack of trying; the Marines’ HQ was destroyed by phosphorous grenades and machine-gun fire BEFORE the Argentine special forces realised it was empty.

The sequence of events is well known (see the tab at the top) but this writer would argue that the true short- and long-term effects of the conflict have never adequately been documented or understood outside of these islands. I haven’t dared to attempt it (yet) and I’m not sure that I ever will. No doubt it would run into thousands of words, and not just as a result of my tendency to waffle on.

Anniversaries in history tend to bring about an increased sense of remembrance and the events of 1982 are no different. I write about this particular phenomenon this year, however, as there has been one notable difference in 2020: the parallel.

Recently, there has been a communal sense of foreboding, anxiety and uncertainty about what the future holds. There have been restrictions placed on travel in and out of the islands adding to that uncertainty. There has been a constant stream of press releases and official government notifications concerning all kinds of mundane things. There has been a detachment of military forces sent to assist by Her Majesty’s Government. Most significantly, there have been an ever-increasing number of restrictions on personal freedom and movement (though comparatively mild by international standards). All of the response to Covid19 has fallen in the lead-up to April 2nd.

Several people in the islands, then, have mentioned feeling a dark sense of deja vu. They have, however, pointed out that last time they could at least see the enemy.

I can’t pretend to understand: I wasn’t here. I did think it was insightful that the comparison was being made and that it wasn’t just by one person. The battles might have ended 38 years ago, but there is evidently more to reconcile here than a sovereignty dispute.