Before we get to mass murder, let’s start with everyone’s favourite kind of reading: a long-overdue but abridged Falklands history lesson!

Believe it or not, France established the first colony in the Falkland Islands. Louis-Antoine de Bougainville established a colony at a place called Port Louis in 1764. In fact, what many people don’t know is that the Spanish word for the islands (Islas Malvinas) comes from the FRENCH name as the first settlers came from St Malo and named the islands Iles Malouines after their home.

Unbeknownst to the French settlers, they were co-existing here with a British colony established at Port Egmont on Saunders Island a couple of years afterwards. There then followed a bit of old fashioned colonial back-and-forth where France sold the islands to Spain, who removed the British settlement. This brought Britain and Spain to the brink of war, before Spain disavowed the actions of the local commander and returned Port Egmont to the British. They re-established their old colony for a few years before they left it in 1774 due to economic reasons (while maintaining their claim to sovereignty). Shortly afterwards in 1811, Spain also left East Falkland (also maintaining their claim to sovereignty – see a pattern emerging?). By 1826, a private businessman (Louis Vernet, carefully walking a sovereignty tightrope between the UK and Argentina by then) had established a wild cattle business and colony but in 1831, after he confiscated some American sealing vessels for acting without authority, his settlement was destroyed by the USS Lexington in a reprisal and the colonists were removed.

The next major event to occur was the attempted establishment of a prison colony at Port Louis by a Captain Mestivier acting on orders from the Argentine government in 1832. Unfortunately, his men promptly mutinied and murdered him. They were rounded up by the ship that dropped them off, but then things got a little more complicated when Captain Onslow of HMS Clio turned up in 1833 with no way of contacting Britain for orders on what to do with this illegal (in their eyes, of course) Argentine prison colony. This is where the two claims to the Falklands divide. Records show that Captain Onslow removed the Argentine garrison and any other civilians who wished to return to South America (some returned to Uruguay and Brazil), while those that remained (some notable Argentines among them) were instructed that they now lived under British rule (which has been continuous ever since, bar a brief 74-day interlude in 1982). The Argentine claim repeated in the UN each year is that this was the forced removal of a population and that the British population now in existence (10 generations in) is an implanted one and therefore do not count as a nation. This is unlikely to be solved anytime soon, but it does mean 1833 is a key year in the Islands’ history.

1833 is also notable for a number of other occurrences. 1833 was the year that the Beagle, captained by Fitzroy and carrying Charles Darwin,  arrived for two visits in the Falklands. What drew me to the location of the original settlement at Port Louis on a recent school trip, however, was my knowledge of what went on between these visits: the Port Louis murders! I was asked by the Primary school if I could accompany their trip out to Port Louis with the daughter of the landowner to add what I could to their study of what happened there and I jumped at the chance as I’d been keen to have a proper explore of the original settlement since arriving. Everywhere you go in the Falklands, always take a historian!

Port Louis today. The main house is the oldest stone house in the Falklands and is the remains of the British garrison building (complete with gun-slits).

Now that you’ve got the background (you did get it, right?), we know that Louis Vernet had established his business here, but with a mixed amount of governance throughout. As a result, some of the South American cattle workers (gauchos) had become accustomed to living in a state without the rule of law. Led by one Antonio Rivero, they raised their grievance over the issue of Vernet paying them with a currency only valid in his store on the Island. Vernet’s decision, made in his absence, prohibited them from trading with sailors and they took matters into their own hands. Vernet’s manager, Matthew Brisbane (who, poor man, had only recently returned to the islands having been arrested in the USS Lexington incident mentioned earlier and treated like a pirate until his eventual release) was promptly murdered by a group of 8 gauchos running wild, along with his Capitaz Juan Simon.

The remains of Brisbane’s settlement on the point

A suitably old cannon dug into the ground. I’ve seen this before elsewhere, being used to tie boats to

Another of Brisbane’s workers, Don Ventura, was shot through the neck, had his hand nearly cut off and his head cut open before being left for dead. He crawled through a window to a nearby house until the gauchos returned from murdering two other workers, where they noticed his body was gone and searched for him before shooting him dead as he tried to run away. Five murders in, the gauchos celebrated by dragging Matthew Brisbane’s body tied to a horse and ransacked the settlement. As a final insult, his corpse was left unburied and the settlement dogs fed on it.

Thirteen men, three women and two children were left in the settlement for a couple of days with the murderers running around before they were able to recover one of the boats cast free by the gauchos. They made their escape to a nearby barren island to survive for months living off wild eggs while they waited rescue. One survivor, Thomas Helsby, wrote his account of the murders and their escape. Tellingly, he makes reference to a resident known as ‘Black John’ who they leave behind in the settlement and makes no further reference to him afterwards. Take from that what you will about attitudes in the mid 19th century.

Brisbane and his companions were eventually buried when a British naval party restored order and rounded up the gauchos, before taking them to the UK.

Alas, 19th century law wasn’t clear-cut and there was some political debate about trial for murders occurring outside Britain, so the murderers were returned to South America and released without charge. Antonio Rivero has since cropped up on a bank note in his home country and, in 1982, Argentina renamed Stanlety Puerto Rivero for a short time (before some Argentine historians pointed out that he was a mass murderer and they swiftly renamed it Puerto Argentino).

Thankfully, Port Louis today is a peaceful and pretty place that harks back to so many typical elements of Camp life, as you’d expect from the oldest settlement here:

Sticking with typical aspects of life here, we had clear, sunny day out at Port Louis before two days later this weather hit on mid-Winter’s day: 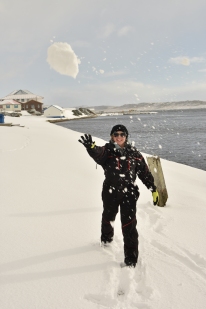 As well as offering some boiler-suited fun in the snow, it doesn’t half make this place look pretty, so even the cold weather has its upsides: 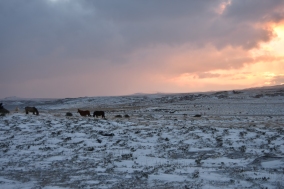 There are, of course, a few people who don’t agree with the cold weather. There’s also one other by-product of it: turkey vultures need to gather together to keep warm and dry their wings on North-facing trees. Here’s a final fun game, zoom in and count the vultures outside Stanley House (the boarding house for the school):

The inclement weather brought incredibly rough seas so the annual Mid-Winter Swim has been postponed. Watch this space.

We often dread Winter in the Falkland Islands, as I’m sure many people would understand looking at the map I posted a while back. The truth is, it’s never quite as bad as we’re expecting. Sometimes, I get the feeling that we’re waiting for Winter to ‘kick in’, and it never really does. Yes, it gets cold but I wouldn’t say it’s much worse than the UK. With things like Liberation Day and the upcoming Midwinter Swim coming up as the year goes on, there’s always things to do and I’ve alluded to the social aspects of life here before. Still, half term was last week and the extra bank holiday of Liberation Day gave way to an opportunity for a weekend away. We headed out to Johnsons Harbour, a settlement most often visited as the jumping off point for the trip to Volunteer Point.

The road to our place for the weekend

It’s only about 45 minutes out of Stanley driving up the North Camp (gravel) road but it makes all the difference to get away from town and relax away from it all. This trip was unusual for us as we didn’t have specific plans (given that the peat soaks up too much water for most off-roading) so we were in for time spent with friends, likely doing some walking and relaxing in the evenings. Johnsons didn’t disappoint, especially as the accommodation is so nice. The coastline is sheltered and great for just walking the wilderness. As with so often here in these Islands, we stumbled on a little maritime history (there are, after all, 126 known shipwrecks here in the Islands).
Storytime (courtesy of some information in the self-catering, much of which I suspect needs revisiting): In 1833, the Magellan (a small, French whale catcher) wrecked on this beach. The crew stayed on the beach in tents made from their sails before the Beagle happened to stop by. You might know that name from the ship’s Captain (Fitzroy) and Charles Darwin on board. They picked up the crew and lifted as much of their things as they could (as well as buying a lot for firewood) before taking them onto South America (where the remaining cargo was sold with 20% going to Fitzroy, so it wasn’t all kindness). Sadly, Darwin’s clerk went missing and his rifle and some belongings were found on this beach. His body turned up not long after, seemingly having been caught in the kelp as he was trying to shoot and collect ducks for Darwin. He remains buried at nearby Port Louis, I understand. What you see below is all that appears to remain of the Magellan (you can just make out the outline of her at low tide). Still, an nice unexpected surprise for a History teacher.

All that remains of the Magellan, 1833 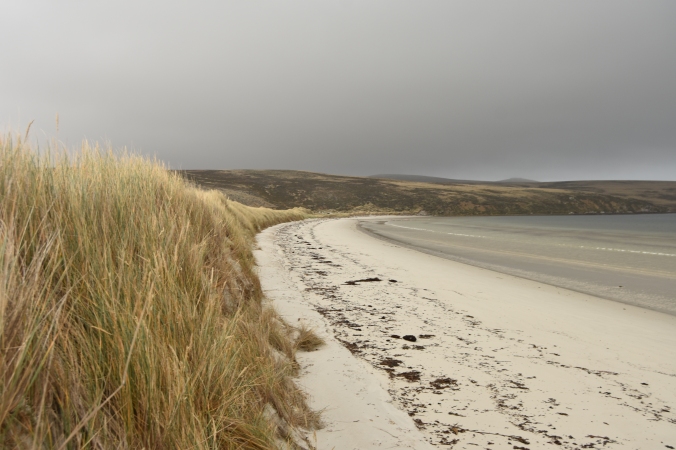 Back on our story, we also enjoy Johnsons as they have my favourite farm animals and they’re brilliantly tame:

That did make us feel a LITTLE bit bad about the evening barbecue: 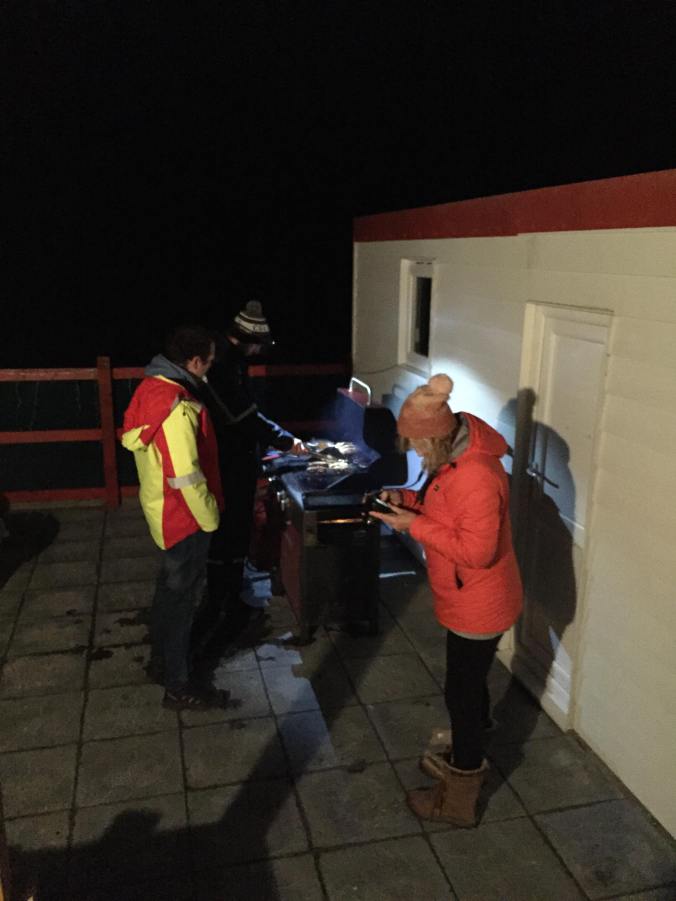 The other exciting thing about visits to Camp is the opportunity to stargaze and improve on my photography by making use of the clear skies and lack of light pollution here: 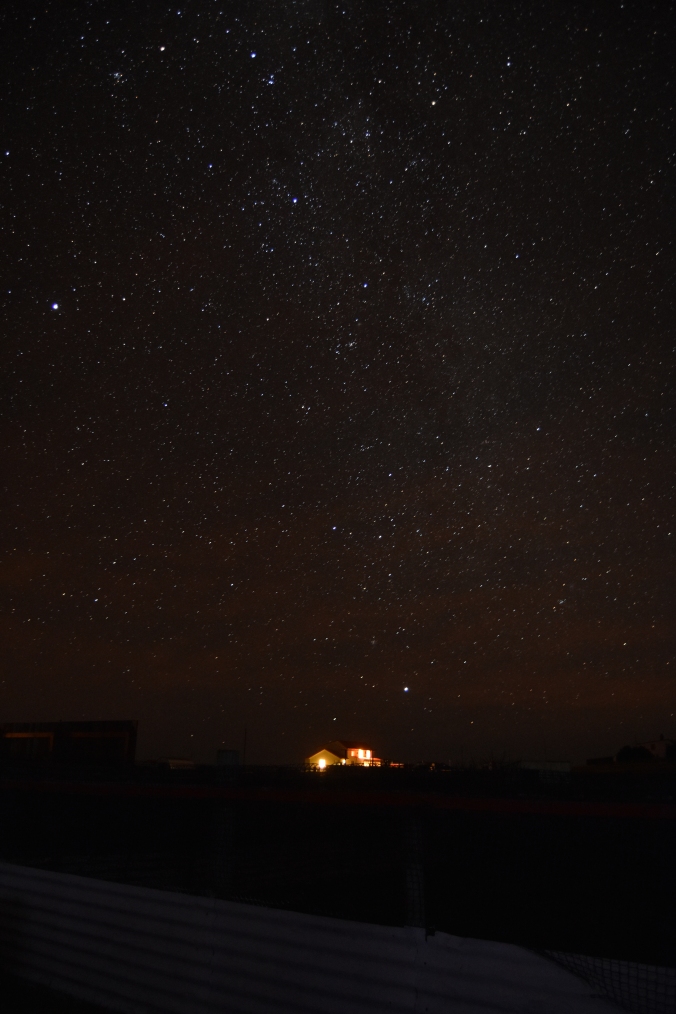 The main house, lit up

Rob took this one of our self-catering

It’s so nice to have so many options for weekends away in different places. I’m also very pleased with how my photography is improving here. I was worried that I wouldn’t be gaining as many skills as Han seems to be but it’s just another example of the unexpected effects that moving here has had on both of us. Next up, learning to ride the motorbike I recently bought!!!

This time last year, I wrote about Liberation Day.

There is little else I can say this year that isn’t already covered by that.

Somehow, the longer we spend here, the more this day seems to mean. We remembered, we celebrated and all within a community and among friends that we feel increasingly close to.

From the sea, freedom.

The parade salute the Liberation Memorial. In the background to the right, the peak is Mt Longdon; site of one of the major battles for Stanley.