It’s a funny time of year, Winter. No doubt the mainstay of the general public’s idea of the Falklands comes as a result of the imagery associated with the conflict. The infamous images of bleak yomps taken by the Marines or soldiers (on both sides) shivering have cemented the idea that the Islands are an inhospitable destination for the season. The recent arrival of a couple of people on temporary working visits served as a handy reminder that, even in the depths of Winter, there’s still some upsides to living at 52 degrees South.

Last year, you may remember, we took part in the annual South Atlantic Midwinter Swim – a fundraiser where hundreds of residents plunge into the waves of our local beach, Surf Bay. This year, we HAD decided that we already possessed our Certificates of Lunacy and therefore didn’t need to take part. Han, on the other hand, fell victim to the aforementioned ‘fomo’ and decided last minute that the beautiful sunshine, the snow on the ground and the lack of wind made for too good an opportunity to miss. The result? See for yourselves:

Han and our friend Neil emerge from the water 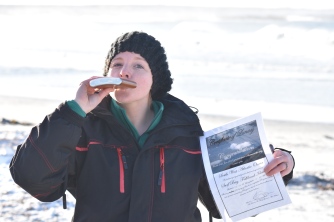 To the victor, the spoils

The snow that he had also provided a stunning backdrop that same day for a walk that I have done innumerable times in all kinds of conditions. All kinds of conditions, of course, except deep snow. So it was that we took another contracted friend of ours up the gentle slopes of Mount Tumbledown:

Just a few days after the Midwinter Swim,  we were treated (to some, worryingly) to something we’ve been hoping to see since we arrived but had no guarantee of coming across: the infamous Leopard Seal. They don’t live and breed in set colonies here in the islands like many of the seals  but have been known to visit and hunt here. They’ve got a fierce reputation, as a result of a combination of their looks, their behaviour, their past killing of a scientist and Happy Feet. It was a little disconcerting, then, that one happened to pop up onto our nearest beach, Surf Bay. Yes, the same beach that had hundreds jumping in just days before. This caused a little stir in town but, really, it seemed a tad overblown as any form of a threat. I mean, just LOOK at the young’un: 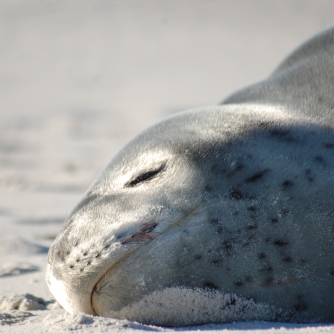 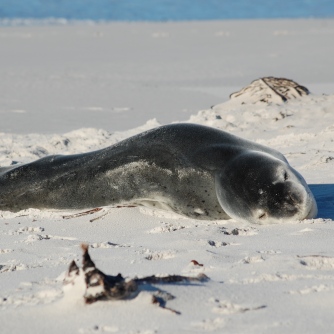 It was hard to reconcile this docile creature with the vicious reputation it has. That was, of course, until we were casually driving a new arrival in town down the road to see the Lady Liz. We crossed the bridge leading to it only to see something in the water…

Given that this was inside Stanley harbour and significantly large, it seemed sensible to conclude that this was an elephant seal. No major surprise to find them close by, they do turn up every now and then. We were wrong, however:

Something of the Jaws about this one 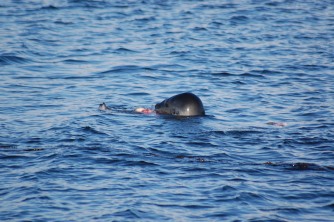 The victim: a Southern Giant Petrel.

As if the temperature wasn’t enough to keep us out of the water, watching the carnage and the thrashing of this lucky encounter want. Bit of a brute, those leopard seals.

Just so no-one has nightmares, here’s some pretty pictures taken the same day to detract from the violence of nature’s Antarctic predators:

Yorke Bay sand dunes. The next minefield to be cleared

Spot the dolphins. All in a day’s work.

Our friend was pretty pleased with his day. And I guess he should be when this is all seen in the space of an hour and within 10 minutes’ drive of home. I guess that’s why we keep the blog up now; to remind us not to take this place for granted.