If it hasn’t already become clear, this place is full of sweet little oddities. The Hospital here is the basis of healthcare but having been blessed with the Bailey immune system, I’ve not had anything to do with it yet so can’t comment on the standard of what’s available. In an emergency, there are 3 very typical options available for residents here.

One option are the Defender-come-ambulances that make me smile every time I see them with their true Falklands pedigree. The other option is to be medi-vacced to Chile, UK or Uruguay, either by civilian plane, commissioned private jet or RAF Hercules depending on wind speed/direction, flight availability and medical necessity.

The last option was the much-loved RAF Sea Kings that frequently landed on the nearest open space to the hospital: the school sports field. This week saw the long arm of privatisation of public services extend 8000 miles South to see the RAF Search and Rescue services handed over to civilian operators in a formal ceremony. This ceremony took place on the school playing field and saw three helicopters adorn the school field with the Governor, CBFSAI (Commander British Forces South Atlantic Islands), a fly-past with the Tornadoes that protect the Islands and some very mixed emotions from the community. 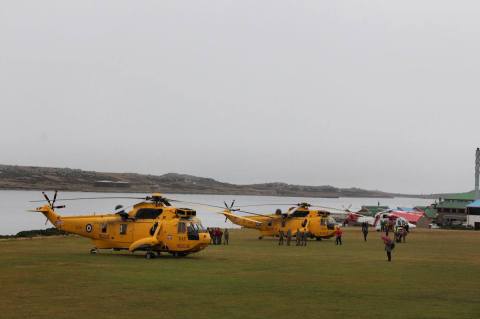 Two RAF Search and Rescue helicopters and the new civilian SAR in the background – they could have at least painted them yellow!

On the one hand, the big yellow monsters will be missed by those of us who take part in outdoor pursuits as a distinctive angel in the sky. On the other hand the small size of the community here means that every time a helicopter lands to drop off a casualty, chances are that many will know the victim or their families. As contractors, it’s unlikely that we’ll know this feeling unless we stay and learn each and every member of the population as so many do. So for us as a school, it was a pleasure to stand on the field and witness the last take-off of the workhorses here on the Islands. I’ve heard that some are being sold off for between £10-20,000. Han might take some persuading before I get the man-cave I’d like.

Note: Photos not taken by us. My lack of DSLR and the HUGE number of photos taken so far since arriving has led me to stop taking many lately. I should try to change both of those soon.

One thought on “And it’s goodbye from them”