The last month in the Southern hemisphere has shown some brief signs of Spring, which saw all kinds of annual traditions/patterns remind us that the Summer approaches again and nature will soon be blossoming even more than usual here. Two years ago, we made the choice to spend our first Summer here on the Islands rather than travel elsewhere, which proved so memorable that last year Han’s family joined us (one day, there might be a blog post about that – Irish timing pending). This year, it looks like some of my family will be joining us so that’ll be three for three on Summers spent on the Islands. It’s not that it’s especially tropical, obviously. In fact, it’s usually the opposite as the wind picks up outside of Winter. It is hard to explain/capture what it’s like to live with the ceaseless Westerly winds but nevertheless I tried (and failed) to capture the last few days’ worth of 35mph winds:

The Lady Liz taking the same beating it has done for c.100 years

The Lighthouse skies on the move

Contrast these unpleasant conditions, then, with the beginning of the Motocross season here on the Islands a couple of weeks ago, when we made our way out to the beautiful farm at Long Island for the day’s (free to attend) racing and you’ll get a mediocre example of the unpredictability of the weather here:

Not a bad spot for a bench

The beach racetrack seeing some practise

I will use that poor excuse for meteorology to segue into the unpredictability of other aspects of life here, however. Last week, just going to work ended up with me seeing the following two sites (photos not mine):

Sheering a sheep at school assembly

It is a characteristic of the small community life here that you just never know what you’ll be getting up to next. The weekend just gone, for example, we had two boiler-suited barbecues in two days, one in town and the other out at the settlement of Darwin (two hours’ drive from town) with some impromptu archery thrown in. The Darwin barbecue gave us the first opportunity we’ve had to catch up with our friend Guy who signs off the de-mining program here. The de-miners have been back for about a month now and continue their sterling work taking care of the very real remnants from 1982. They are expected to finish in late 2020, but in the meantime Guy was able to update us on the fate of the Goose Green sheep that captured the attention of so many friends and family online in our blog post back in April. It transpires that we weren’t correct in stating that the sheep would be unlikely to set off the anti-personnel mines; the most sensitive types recovered take just 8kgs to set off (and they are also, we are reliably informed, the most likely to remain pristine). As such, it hasn’t been uncommon for sheep to suffer the same messy fate as the cow from the Murrell Farm that strayed into a minefield (and stepped on an anti-tank mine that happened to be resting on an anti-personnel mine acting as a fuse). 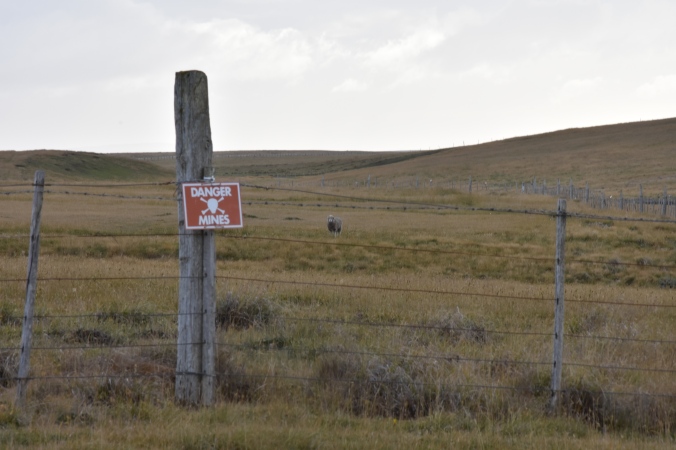 Guy informed us that this cheeky Goose Green sheep had, in fact, been chased out of the minefield on several occasions (quite HOW I don’t know as dogs would also be a suitable weight and people entering the fields would risk prosecution alongside maiming). Each time, however, he had returned to the field in question! We can only assume to bask in the attention and fine pasture (in that order). Thankfully, you’ll all be pleased to hear, the de-mining team recently signed off the Goose Green minefields as now being clear of devices and the sheep is conclusively safe from landmines! Thus, this particular fable about taking risks, spreading your weight, greener grass, going your own way and many other life lessons, all wrapped up in this heart-warming and historically-linked tale of a cute animal, ends happily ever after thanks to the amazing team at BACTEC/Dynasafe. I’ll pay a visit to the de-mining office at some point to get the full low-down on the mine situation for you all, but in the meantime here’s one proven upside of their work. Oh, and they save people from dying too.

One thought on “Sprung”