It’s been a fairly ‘Falklands’ few weeks. That could mean a number of things on a number of occasions but the last few weeks have been holding a few post-holiday treats for us. Before arriving here, I had been concerned that the windswept, desolate descriptions of the landscape would mean limited opportunities for outdoor pursuits but I’ve been fortunate that there’s been a few adrenaline fixes to be had around: 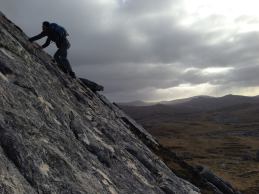 The summit slabs of Mt William 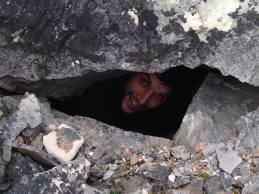 We found a hefty cave too 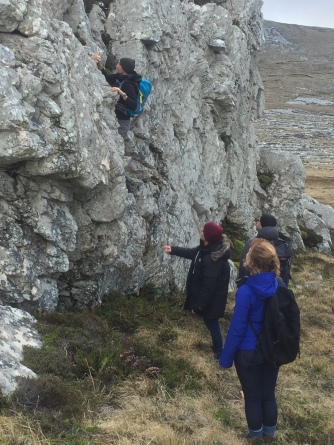 Our first trip, up and over Mt Harriet to Two Sisters

Looking back from Goat Ridge to Stanley

As well as the free fun to be had around Camp, some good friends of ours took the wonderfully presumptive step of booking us on a trip to Sea Lion Island during September as they were running an offer. Sea Lion Island is most well known locally for it being the best place to be almost-guaranteed to spot Orca whales so takes full advantage of the draw to run at an extortionate rate per person per night. Add the cost of the semi-charter Islander flights and it makes for an expensive weekend away for two. This means that many people see Sea Lion as being out of reach, but their close-to-half-price offer for September meant that we could hop across for the night. We had hoped to be able to witness the phenomenon shown on BBC’s Life as seen below:

Sadly, this particular female couldn’t be seen at the pool so early in the season. Nevertheless, the Island is home to 95% of the Elephant Seal population of the Falklands, as well as numerous gentoo and magellanic penguins, sea lions, caracaras and the usual assorted wildlife to be seen by the intrepid as well as the orca pods. The elephant seals have to be one of the most ridiculous creatures in the World and, weighing in at 4 tonnes, the bulls are not to be ignored. They are, fortunately, one of the most docile of the wild animals here so it makes for a pretty unforgettable weekend. Apologies for the sheer number of photos but we loved it on Sea Lion and the wildlife was all around. Remember to click the pictures for captions/to see them properly: 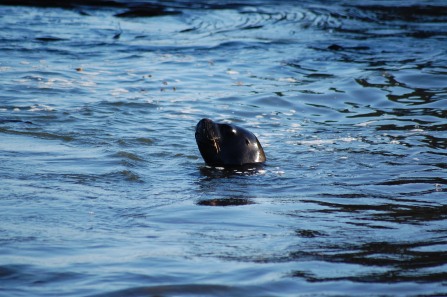 This female sea lion was enjoying the shallows

The first orca pod close in to shore

The Elephant Seal Research Group tagged this one, not me!

The Elephant Seals cover themselves from the sun 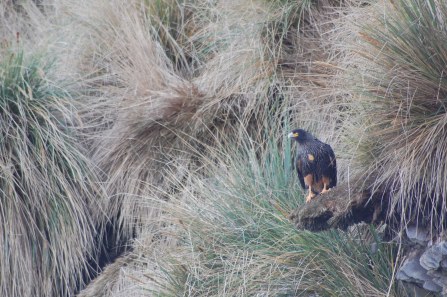 Bull coming in to shore

These ducks were swiftly scared off by orca

Giving the elephant seal its name

The gentoo colonies are present too

And there they are!

Breakfast? Perhaps this sea lion was close in to shore for a reason

This pup showed us Spring was coming

The Southern Giant Petrel, scavenging after the pup’s birth. Yum

The bulls aren’t gracious coming out on to land

Caracara back at the lodge

What’s she been eating?

The size difference can be large

Regi and Han sneaking up on the gentoos. Can you see them?

Turkeys on land, less good looking than in the air 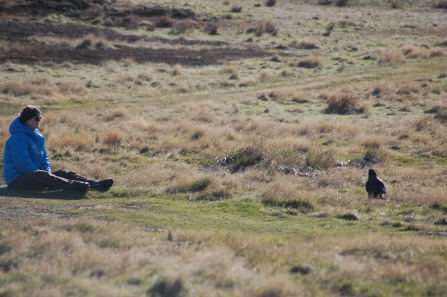 Regi tries to tempt the caracara to come play

Orca on morning, HMS Clyde in the background 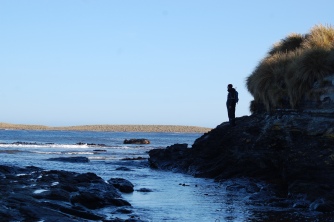 The pool from the BBC Life clip 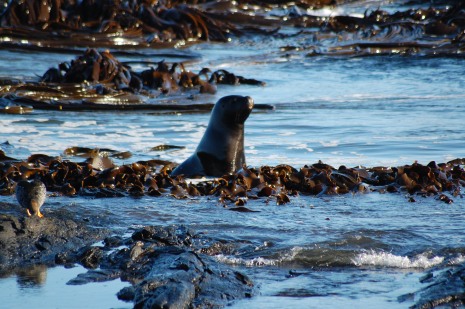 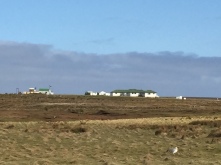 Sea Lion Lodge, the only settlement on the island 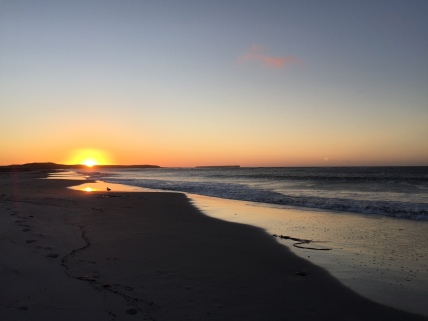 Heading home, Falklands from above

The last ‘Falklands’ aspect of our time here came in the form of the annual Craft Fair. Remote living makes people get good at a lot of very handy skills, I guess out of necessity. So it came as little surprise that the small population here turned out a disproportionate number of entries into the different categories of arts and crafts. Not being ones to miss out on taking part in life here, Han pitched her quilting skills against the finest experienced quilters here and, last minute, decided to enter the mugs we painted at White Grass Ceramics (paint your own pottery) out at San Carlos. Han managed an impressive 3rd place (1st and 2nd going to her friend Wendy). In what I can only assume was an astounding act of pity by the judges, my own mug placed a whopping 2nd place and Han’s followed with being awarded Highly Commended. Han is now looking forward to a lifetime of being reminded about my award-winning art skills: 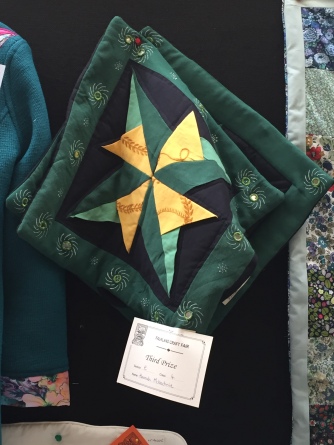 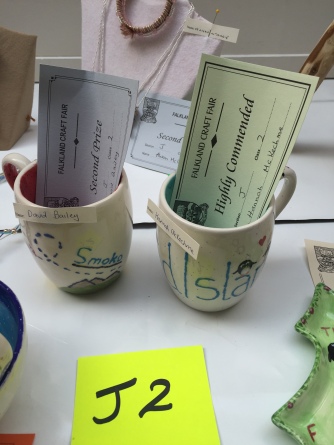 There are, slowly but surely, signs of Spring appearing and the weekend’s forecast should give us plenty more to talk about, with the MotoX starting back up and the social event of the year tonight (the Falklands Conservation Ball):

First egg of the season from our hens 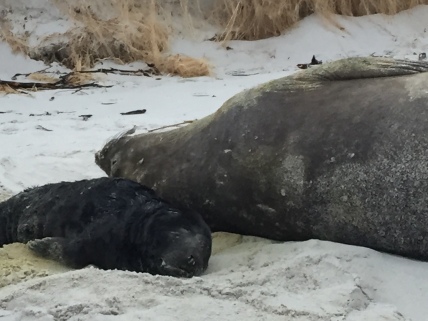