The much-maligned death of our Hilux left us facing half term this week with limited options for adventure. This week marked Camp Sports Week (Camp being the countryside, so a week of Sports such as horse racing out in the country not to be confused with a week of effeminate games). We had a prior engagement in Stanley over the weekend so missed the Goose Green races but were able to join some friends out at Darwin for a night’s camping (our first since arriving here) before making our way to the Goose Green Dog Trials. The abundance of sheep farms here breeds an abundance of working dogs which are always a pleasure to see in action, but they clearly weren’t used to the idea of containing just 5 sheep in such a small enclosure. Still, it was a great couple of hours to spend immersing ourselves in Camp life and learning more about the differences between Stanley and Camp (just 2500 people here but divisions do exist in the two worlds).

Struggling with adhusting to so few sheep

The dogs in their habitat; aboard a quad

A winning round, with the emptiness of Camp

We’ve done our best to explore our new home but still many places remain on our hit-list. I’d planned to take Han up to Wireless Ridge (taken by 2 Para in ’82) but the weather was so good that our friend Rob had a better suggestion: hit Two Sisters. This pair of peaks dominates the skyline around Stanley but we’d not yet seen the summit so 20 minutes’ off road drive down what, unbelievably, used to be the main road out of Stanley gave us the afternoon we’d been looking for and also some future scrambling spots to play on. 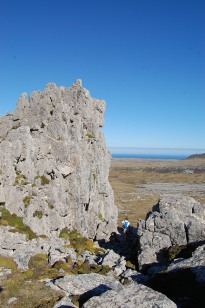 Had to be done…

Turns out it was quite a knife-edge

While we were out, we also picked up a significant quantity of the native Diddle Dee berry. It grows in abundance here and does get used for jam but it’s incredibly bitter, similar to a sloe berry in that sense, so we’ll just have to think of a different use for it. 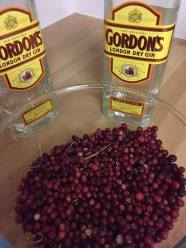 We had expected a fairly sedate week but Thursday night we got a message that a friend of ours had some car space on one of our very favourite trips: Volunteer Point. This is the largest and closest King Penguin colony to Stanley. Close is a relative term, it’s a good 3 hours in total and over half of that is completely off road in a featureless and barren landscape. We’ve blogged about it before so I won’t waffle but there’s a very good reason why we can only go there when others are driving. I drove last time but I was a little relieved to be a passenger this time around with the slightly wetter peat track. Another amazing day that the photos still won’t do justice. Last week marked 6 months since I arrived here and the constant visits to the various species of penguins has left us in tune to their life cycles so it has been amazing to see the penguins return, call/attract mates, breed, incubate and hatch eggs, rear the chicks, gather them in creches and then ultimately disappear leaving just the chicks to molt and then ultimately disappear themselves as many are now doing. The Kings have 18 month cycle of this and so operate on their own timescale to the other breeds so there’s still eggs and chicks around, whereas the Gentoos, for example, are now molting ready to leave. Quite what either of us will ever do with our new-found encyclopedic knowledge of the breeding/migration cycles of 5 different species of penguin I’m not quite sure of yet but it’s one of the things we’ve gained from these Islands whether we need it or not. As I said, the pictures won’t do justice to the time spent at Volunteers but here’s some anyway:

This time around, not all had made it to life 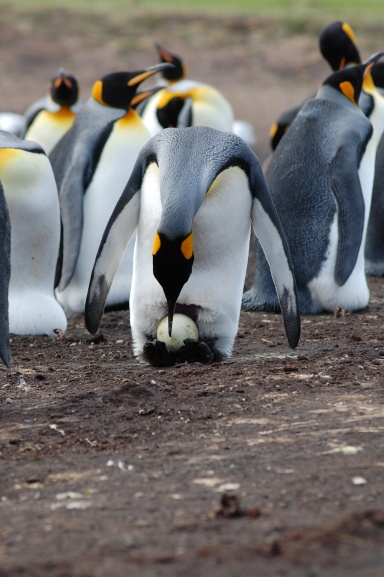 A sizable sea lion made an appearance nearby 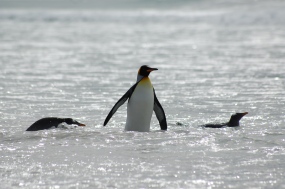 The Kings share the space with thousands of Gentoos

A turkey vulture makes use of the Gentoo colony

The molting Gentoos in their snow-like feather bed