Sincerest apologies for the lack of update last weekend. Unless we stay up between midnight and 6am, when the internet here is free, it becomes difficult to upload photos. In Nick’s words we’ll “use up all our internet tokens”. We’re hoping to head out to a place called Cape Dolphin tomorrow by recommendation but what we’ll find there we’re not completely sure of so there may well be another update very soon.

There is a lot of wildlife in the UK. Much of it stunning and accessible. That has nothing on this place. It’s constantly bewildering that you drive several hours in the UK to find somewhere peaceful and secluded, such as a National Park, and it rightly looks lovely but many places I’ve been and felt secluded, I’ve recently realised that I’ve always been able to tell that humans are nearby. Here, you are able to walk 10-20 minutes out of Stanley in several directions and see absolutely no evidence of people or humans whatsoever.  No roads, telegraph poles, dry-stone walls, fences, nothing. No wonder the wildlife hangs around (though the seal that turned up on the sea wall in the centre of town this week also proves that they just don’t care). A common walk for us now is Cape Pembroke, it’s just East of Stanley and you can walk or off-road drive to the lighthouse that marks the most Easterly point of the Falkland Islands. A £5 deposit at the excellent Museum will get you the distinctive key featured in an earlier post, so I took Han out there. What I didn’t know was that 5-6 seals have set up camp at the lighthouse and were to be found playing in the rockpool below it. I’ve seen seals in the UK, but never have I been able to get this close to observe them. That’s what they mean by the wildlife here. Yes, there’s some here but it’s the contact you can have that makes it so different. Case in point: 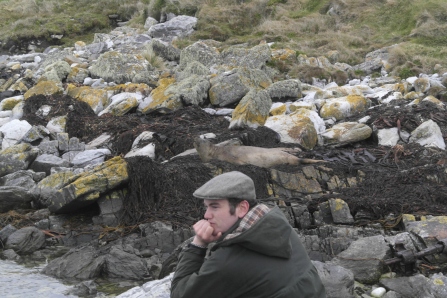 Our friend Matthew painting quite the Falklands scene

One to make very specific people happy. Ask about the Tales of Corridor Sock at a later date 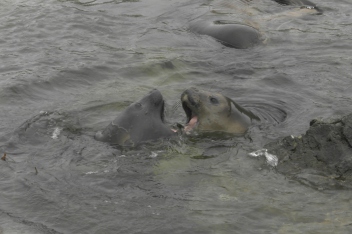 The view East from the lighthouse. Next stop, Africa! 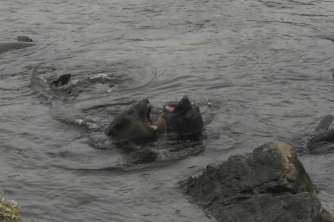